Getting the Deal Through - Air Transport 2018 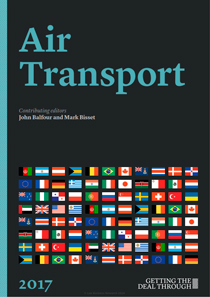 1. Which bodies regulate aviation in your country, under what basic laws?

All aviation activities are supervised by the Civil Aeronautics Authority (AAC), an entity under the competence of the Ministry of Government and Justice of Panama.

2. How is air transport regulated in terms of safety?

Within the AAC there are a number of departments that individually supervise all activities related to safety and operations. Panama is signatory to a number of international civil aviation treaties and agreements, such as the Chicago Convention; the AAC follows the recommended Chicago Convention standards as per its article 37 and it is also a participant of the ICAO. All international standards for safety are reï¬‚ected in the Civil Aviation Regulations (CAR) of Panama, which complement all civil aviation activities considered in Law 21 of 2003.

3. What safety regulation is provided for air operations that do not constitute public or commercial transport, and how is the distinction made?

Law 21 of 2003 defnes such services in its Title VI. Aerial works, as defned in articles 72 and 93, constitute a commercial operation that encompasses any other civil aviation activity that does not include transportation of passengers or goods and cargo.

Private ï¬‚ights or operations are those that are not for a commercial purpose or for valuable consideration.

4. Is access to the market for the provision of air transport services regulated, and if so how?

Yes, commercial activities for civil aviation services are regulated by Law 21 of 2003, Title VI, and the CAR, which establishes distinctions for operations within the territory of Panama as well as for those related to international aviation.

5. What requirements apply in the areas of financial fitness and nationality of ownership regarding control of air carriers?

AAC Law 21 of 2003 and its regulations demand fnancial ftness and technical capacities for all air transport applications.

For commercial operations provided within the territory of Panama, a minimum ownership of 60 per cent should be held by Panamanians during the running of the operation.

For operations for companies created in Panama to provide international services, the minimum Panamanian ownership shall be 51 per cent, as per article 79 of Law 21 of 2003.

6. What procedures are there to obtain licences or other rights to operate particular routes?

Book XV of the CAR prescribes the rules and requirements for approval of routes and for certification of a licensed carrier, whether conducting operations within Panama or internationally.

Panama maintains a number of bilateral and multilateral aviation treaties, which shall be considered when applying for specific international destinations. The reciprocity principle may also be considered in particular conditions.

7. What procedures are there for hearing or deciding contested applications for licences or other rights to operate particular routes?

Contested applications will be decided through administrative proceedings before the AAC. Once this instance is exhausted and a decision is appealed, it will be passed before the judiciary to consider a fnal decision and to reach a conclusion on the issues.

Panama respects open air policies and the principles of reciprocity. It also maintains a number of bilateral agreements related to aviation.

9. What requirements must a foreign air carrier satisfy in order to operate to or from your country?

As per Book XV, article 47 of the CAR, the requirements to be met for an application to be considered are as follows:

10. Are there specific rules in place to ensure aviation services are offered to remote destinations when vital for the local economy?

The rules and regulations of the CAR established for such type of commercial operations are also applicable.

Air carriers are free to set airfares. Regulatory approval is not required.

13. Are there any rules regulating the operation of unmanned aircraft systems (drones)?

Regulation (AAC) DSA/DG-01-06 regulates drones in Panama and the principal requirement is the registration of the equipment and owner.

14. Who is entitled to be mentioned in the aircraft register? Do requirements or limitations apply to the ownership of an aircraft listed on your country’s register?

Ownership and any transaction related to an aircraft is required to be registered at the Panama Public Registry, so it can be acknowledged as valid against third parties (article 30 of Law 21 of 2003).

As per article 32 of Law 21 of 2003, the Public Registry maintains special sections for aircraft, whereby any record as to title, liens, leases, contracts, arrests, claims or any judicial order may be recorded.

15. Is there a register of aircraft mortgages or charges, and if so how does it function?

In order to have a valid charge against third parties, the charge must be recorded in the aircraft section of the Public Registry. As per article 33 of Law 21 of 2003, any charge will be valid from the moment it has been presented for registration.

Any lien or charge must be recorded as a public deed, must include all details pertinent to the charge and the aircraft and all registration charges related thereto must be paid.

Documents produced in a foreign country must follow the process of authentication, to then be converted into a Panamanian public deed, before proceeding with registration.

16. What rights are there to detain aircraft, in respect of unpaid airport or air navigation charges, or other unpaid debts?

Debts originating within the territory of Panama allow the AAC to detain an aircraft following compliance with applicable proceedings. Commercial debts, be they foreign or local, must follow the applicable Panamanian judicial procedure.

17. Do specific rules regulate the maintenance of aircraft?

The CAR contemplate maintenance standards applicable to specific types of aircraft, operations and types of uses.

In principle and by means of article 54 of Law 21 of 2003, international airports are under the direct management and supervision of the AAC and authorities such as customs, immigration and security institutions.

Law 23 of 2003 grants the state and the AAC the power to organize private entities to manage airports and aerodromes, while retaining 100 per cent of the control by the state.

Private aerodromes are considered within the scope of article 58 of Law 23, yet conditioned to the compliance of the standards and requirements established in the CAR.

19. What system is there for the licensing of airports?

The AAC grants licensing that remains under their supervision for the term granted. Additionally, there are two special legislations that have been issued to complement Panama’s strategy to become a regional logistics hub. One is for the Panama Pacific International Airport and the other, more recent legislation, is for the Colon Free Trade Zone, which includes the Adolfo Jimenez Airport.

20. Is there a system of economic regulation of airports, and, if so, how does it function?

The system of economic regulation is generally controlled by the state.

However, in specifc situations, as for Tocumen and Panama Pacifico international airports and Enrique Adolfo Jiménez Airport in Colon, administration and autonomy are regulated under specifc regulations.

21. Are there laws or rules restricting or qualifying access to airports?

Safety and security is coordinated by the AAC with all authorities involved.

The AAC, through its rules and regulations, has issued and developed a number of manuals and instructions related to access and security for airports.

22. How are slots allocated at congested airports?

Panama considers international standards as per the International Air Transport Association’s suggested procedures. The slot allocation regime is most commonly used but slot pools and slot exchanges are also options.

23. Are there any laws or rules specifically relating to ground handling?

Law 23 of 2003 grants the right to contract ground handling services to the board of directors and management of the airports.

The management must request bids for some services when required, and in other instances, such self-handling will be handled by the carrier.

Consideration must also be given to access, taking capacity and space at the airport into consideration.

24. Who provides air traffic control services? And how are they regulated?

25. Are there any special rules in respect of death of, or injury to, passengers or loss or damage to baggage or cargo in respect of domestic carriage?

Article 138 of Title XII of Law 21 of 2003 regarding civil liabilities, establishes all considerations and general rules related to death and injury.

For domestic carriage, article 152 deals with death and injury to passengers. Damage to baggage and cargo are dealt with in article 153 and article 154, respectively. Article 156 establishes the liability exonerations.

26. Are there any special rules about the liability of aircraft operators for surface damage?

Article 183 of Chapter IX, Title XI, of Law 21 of 2003 defines the general principle for surface damage.

27. What system and procedures are in place for the investigation of air accidents?

Title X of Law 21 of 2003 establishes the framework for investigation of air accidents.

28. Is there a mandatory accident and incident reporting system, and if so, how does it operate?

Yes, it is mandatory to investigate any accident or incident reported in Panama.

The investigation is principally technical and it is the responsibility of the unit for prevention and investigation of accidents. Any person that has knowledge of any incident or accident is expected to provide information to the local AAC representative.

Law 45 of 2007, which establishes the general competition law rules, applies to aviation issues in Panama.

30. Is there a sector-specific regulator or are competition rules applied by the general competition authority?

The Panamanian general competition authority and the AAC, depending on the issues, will maintain administrative competence and jurisdiction for aviation matters.

31. How is the relevant market for the purposes of a competition assessment in the aviation sector defined by the competition authorities?

32. What are the main standards for assessing the competitive effect of a transaction?

Standards for assessing the competitive eï¬€ect of a transaction are as follows:

33. What types of remedies have been imposed to remedy concerns identified by the competition authorities?

The authority may proceed as follows:

34. Are there sector-specific rules regulating direct or indirect financial support to companies by the government or government-controlled agencies or companies (state aid) in the aviation sector? If not, do general state aid rules apply?

Panama does not grant subsidies nor any sort of financial aid to the aviation industry.

35. What are the main principles of the state aid rules applicable to the aviation sector?

36. Are there exemptions from the state aid rules or situations in which they do not apply?

37. Must clearance from the competition authorities be obtained before state aid may be granted?

38. If so, what are the main procedural steps to obtain clearance?

39. If no clearance is obtained, what procedures apply to recover unlawfully granted state aid?

40. Is there any aviation-specific passenger protection legislation?

In regard to airfares, Resolution No. 13/DTA/AAC, of 5 October 2007, from the CAA requires that any fare announced for commercial means shall include complete details of all charges, in order to avoid any misrepresentation.

41. Are there mandatory insurance requirements for the operators of aircraft?

Title XII of Law 21 of 2003 establishes insurance as a mandatory requirement for aviation operators and their equipment.

42. What legal requirements are there with regard to aviation security?

Panama, through the AAC, follows the recommendations and standards of the ICAO, and will also establish rules taking matters of national security into consideration.

43. What serious crimes exist with regard to aviation?

Major oï¬€ences include the following: