'We fell asleep and others woke up very early and beat us': Quijano.

The Panama Canal Authority (ACP) restructured the container port project in Corozal to try to give it a concession, in a second call for bids in 2019.

The first tender was declared void in March 2017 when no proponent appeared, in the midst of an accumulation of legal appeals filed against the project by Panama Ports Company, independent attorneys and residents of the Diablo Heights area.

"Corozal is not dead. It is in a state of revision to see when it is re-launched, "said the administrator of the ACP, Jorge Luis Quijano , during the logistical forum organized by the Panamanian Association of Business Executives (Apede) .

In 2014, when the initiative approved by the Canal's board of directors was announced, the construction of the terminal was proposed to take advantage of the demand from shipping clients in the Pacific. Balboa and the then incipient port of PSA did not supply the port needs of the ships.

The proposal sought that the company or consortium that was awarded the tender build a first phase for 3 million TEU or 20-foot-long containers, and a second phase of 2 million TEU. 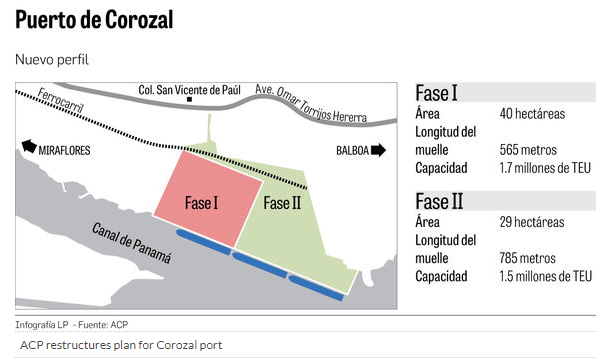 But because PSA and other regional ports, such as Buenaventura, in Colombia, have expanded their capacity, the ACP proposes that the first phase of the project has a capacity of 1.7 million TEUs, and the second, 1.5 million TEUs.

It seeks to take advantage of the demand of 9 million TEU projected until 2040 at the entrance of the Canal in the Pacific. With the expansion of the PSA terminal, 6 million TEUs were reached, including Balboa, so about 3 million TEUs of capacity remain to be developed.

At the moment there are 28 legal actions against the project, of which 20 were resolved in favor of the Canal.

"We fell asleep and others woke up very early, and they beat us," said Quijano, referring to the investments that neighboring countries have made to take advantage of the expansion of the Panamanian water route.

According to Quijano, interested groups and companies have told the ACP that it is essential to resolve the demands to participate in a tender for the project.

In this context it is clear the importance of giving continuity to the national logistics strategy 2020-2050, or policy defined as a tool in the handling of cargo and other services.

Felipe Manchón , participant in the development of the logistics strategy, said that Panama must reach a national consensus and become a regional hub that welcomes companies that develop products with added value.

"One of the great challenges is to achieve consensus for the sustainability of the logistics strategy," added Manchón, without ignoring that the private sector has a great role to play.

In practice, one of the first bets is to enhance the connectivity of the country, the basis of the maritime business. In this regard, steps have been taken such as the creation of the Logistics Cabinet, which has already coordinated some actions to promote the strategy.

The president of Apede, Mercedes Eleta de Brenes , acknowledged that "we have always been a hub [and], it is not very difficult for us to know what we have to do, only that we have to do it well".

"Today we have to understand logistics as one of the main drivers of the country's economy, which will attract more international investment and strengthen our country as the great international service center of Latin America."

Aware of the logistics issue since its inception, and former Secretary of the Maritime Authority of Panama, Carlos Gonzalez De La Lastra , indicated that they should begin to develop new opportunities on the banks of the Canal, mainly with the expansion.