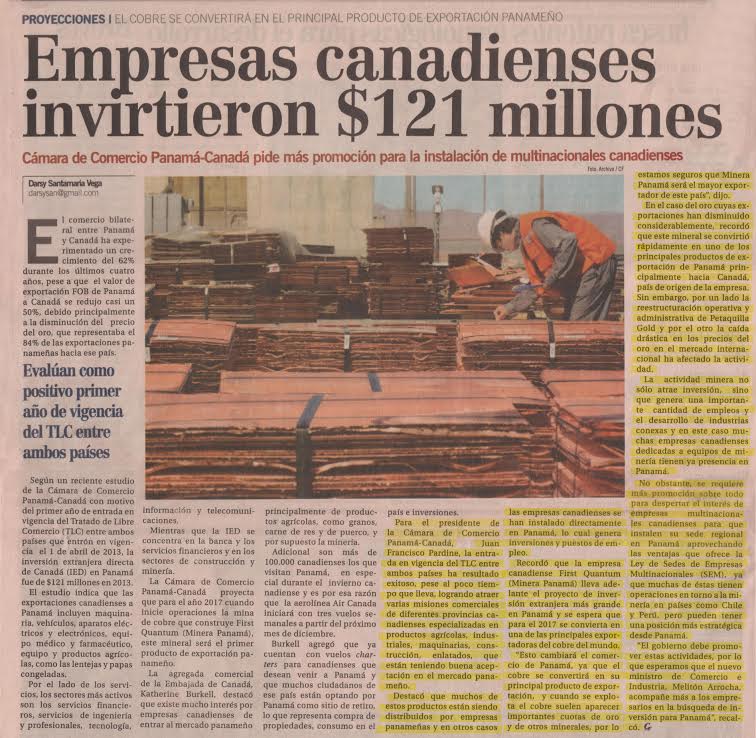 Bilateral trade between Panama and Canada has grown by 62% over the past four years. According to a recent study by the Panama-Canada Chamber of Commerce, marking the first year of the enforcement of the Free Trade Agreement (FTA) between the two countries on April 1, 2013, foreign direct investment of Canada in Panama has reached $121 million in 2013.

In this regard, Dr. Juan Francisco Pardini, president of the Panama-Canada Chamber of Commerce, mentioned that so far it has been successful, despite of the short period, it has managed to attract a number of investments into different areas like agriculture, industry, machinery, construction, food production, which are crucial parts of Panamanian economy. He also indicated that more promotion is required for more involved of Canadian companies in Panama.

“The government should promote these activities and we hope that the new Minister of Trade and Industry, Meliton Arrocha, will accompany most entrepreneurs to seek investment to Panama", he said.

He recalled that the Canadian company First Quantum (Minera Panama) carries out the biggest foreign investment project in Panama and hopes to become a major exporter of copper in the world in 2017.

"This will change the trade in Panama , since copper will become its main export product, and when copper is exploited large shares of gold and other minerals usually appear, so we are sure Minera Panama is the largest exporter of this country, "he said.